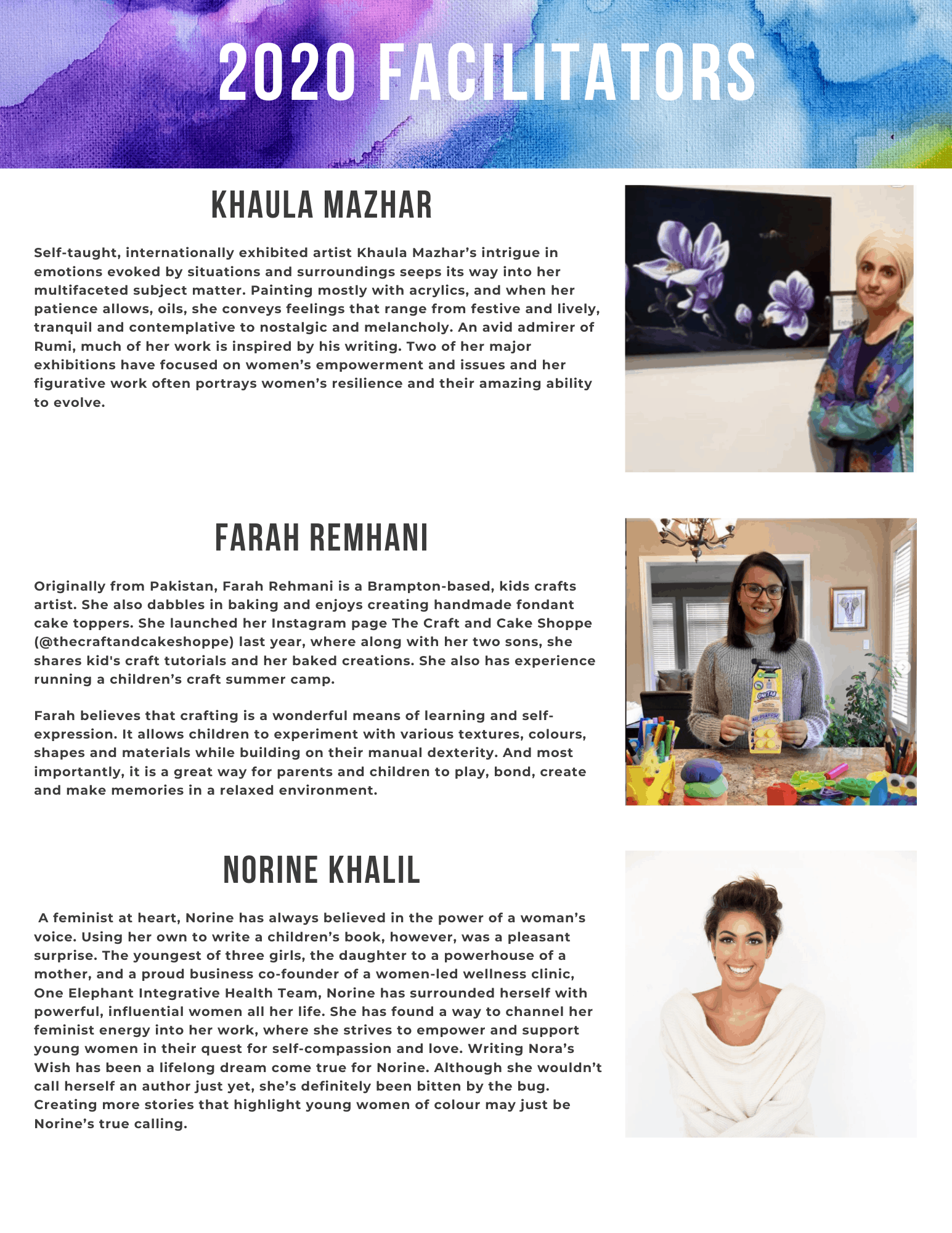 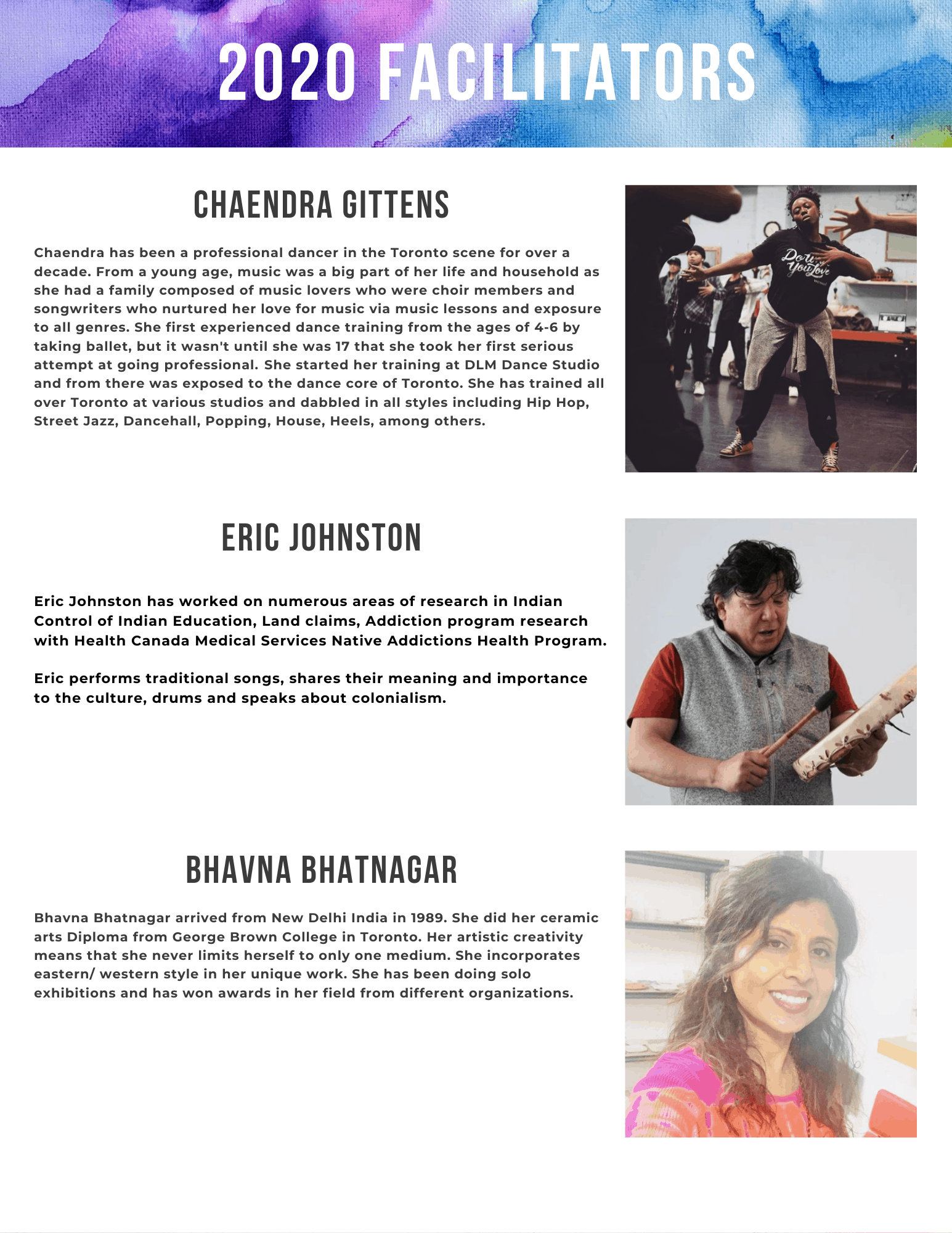 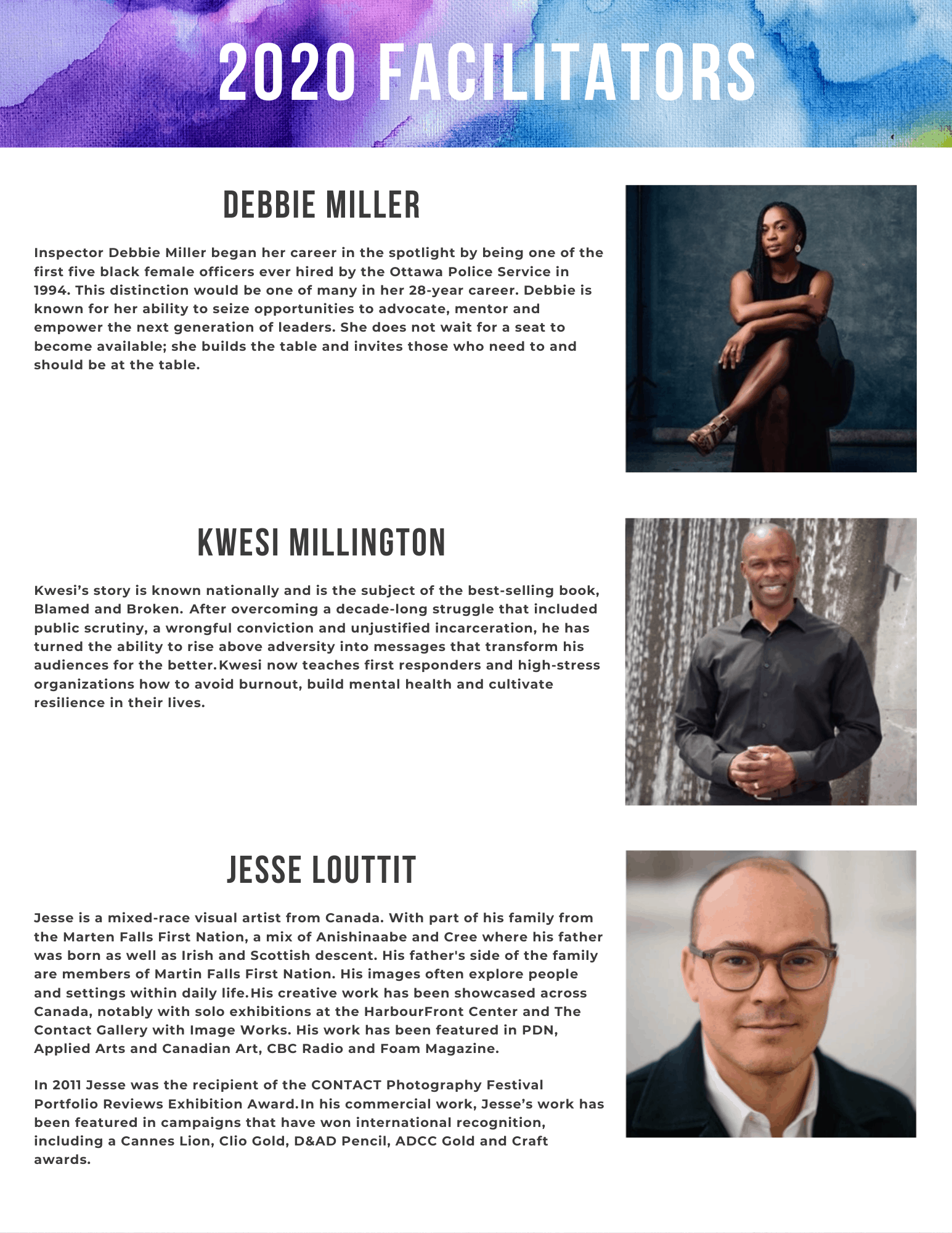 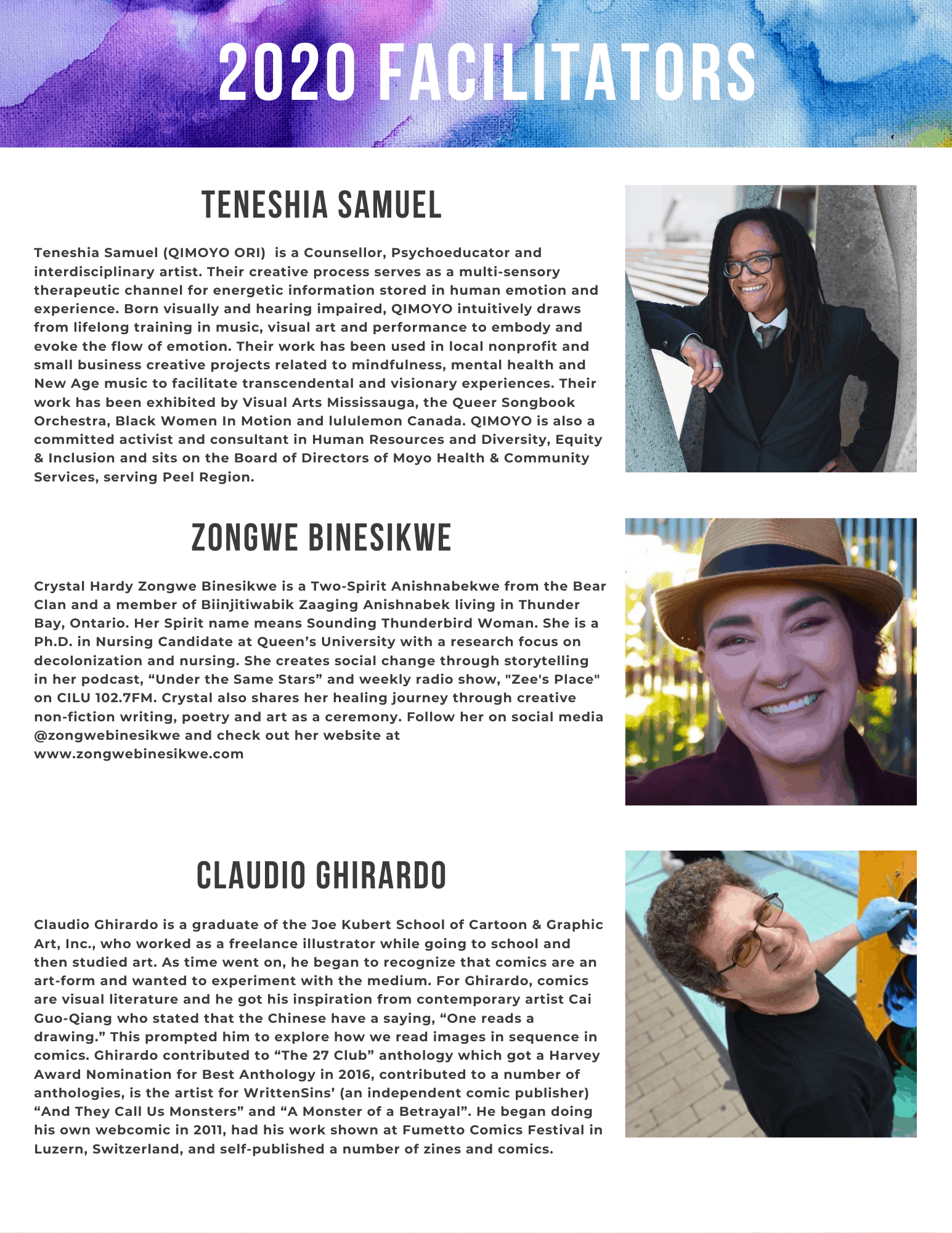 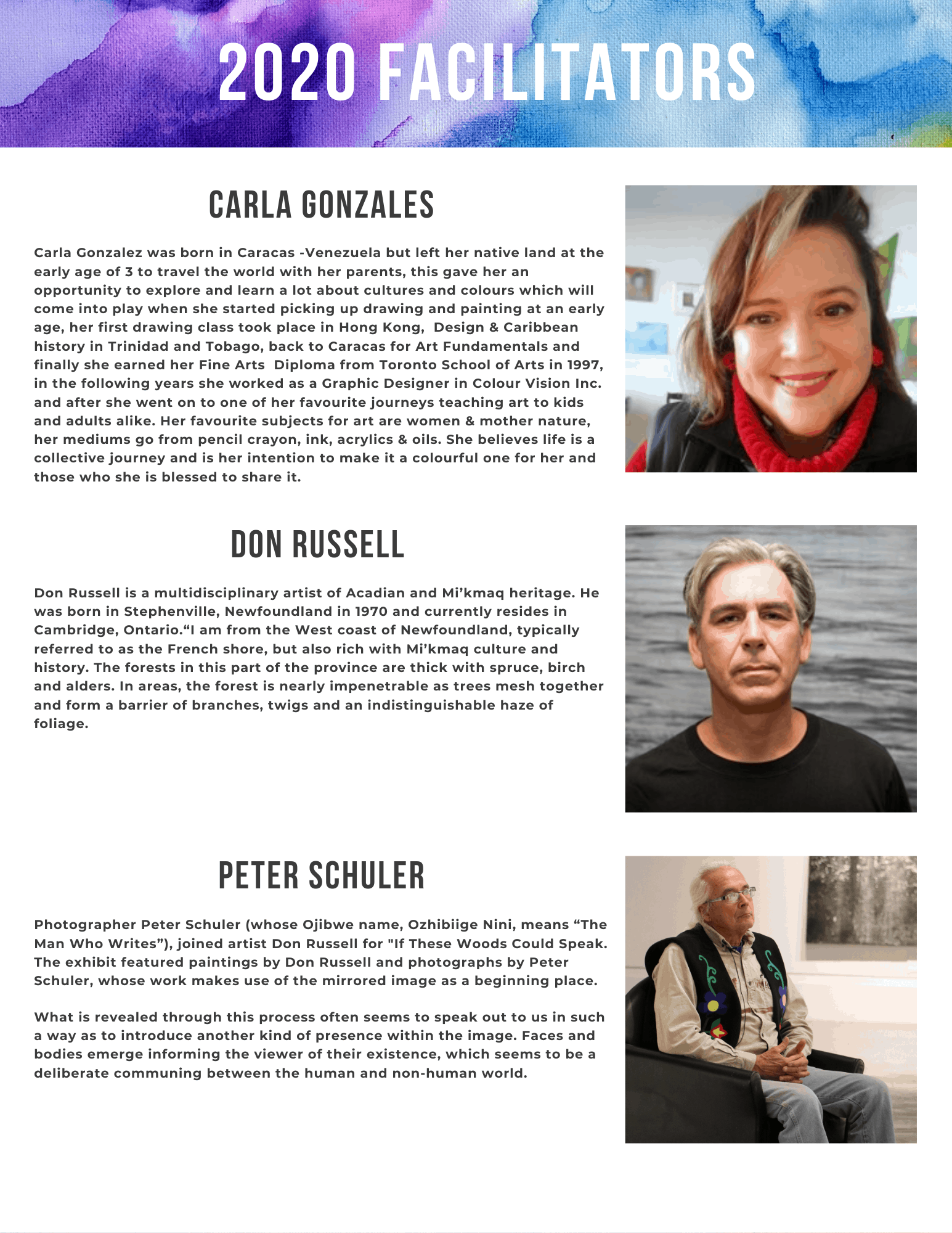 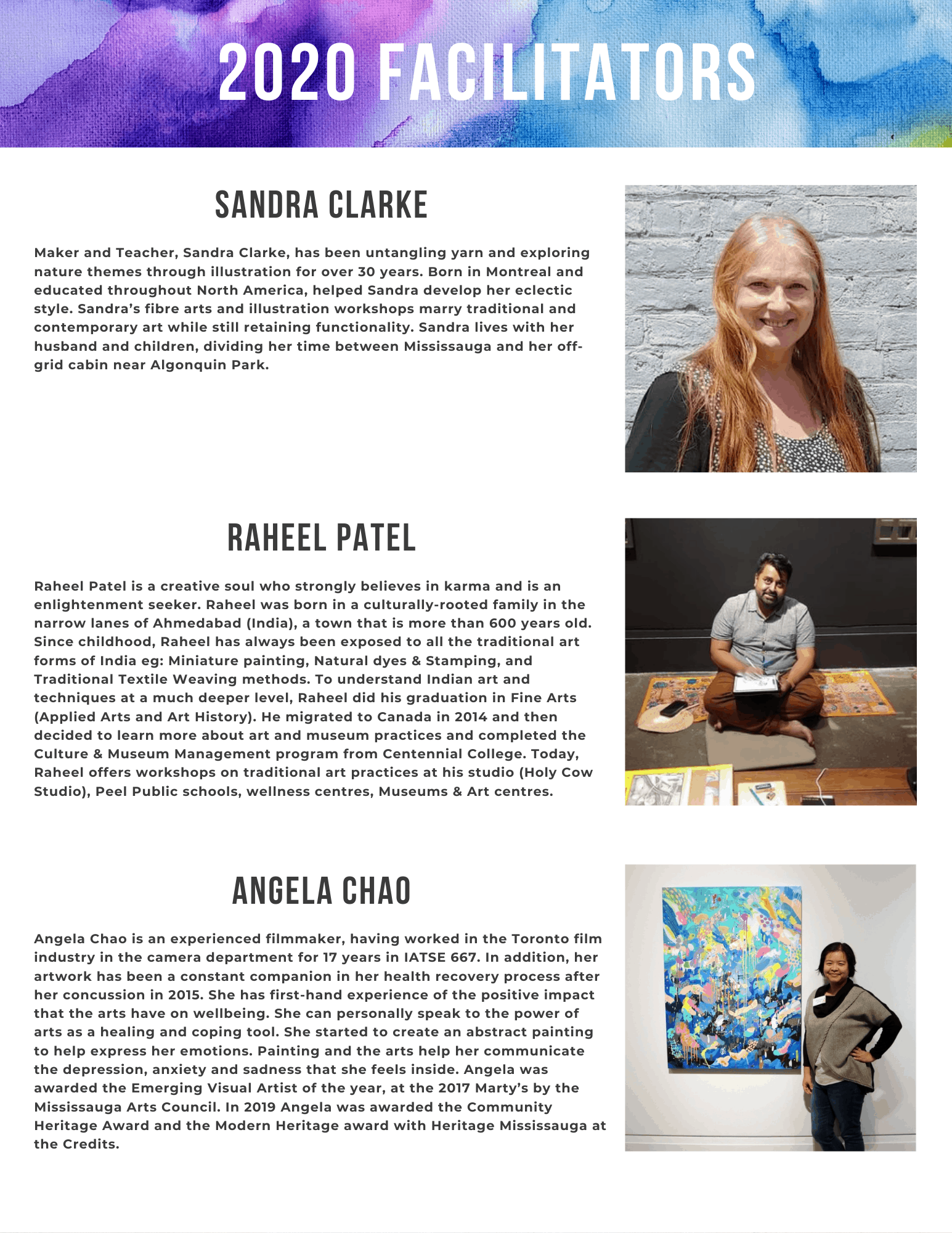 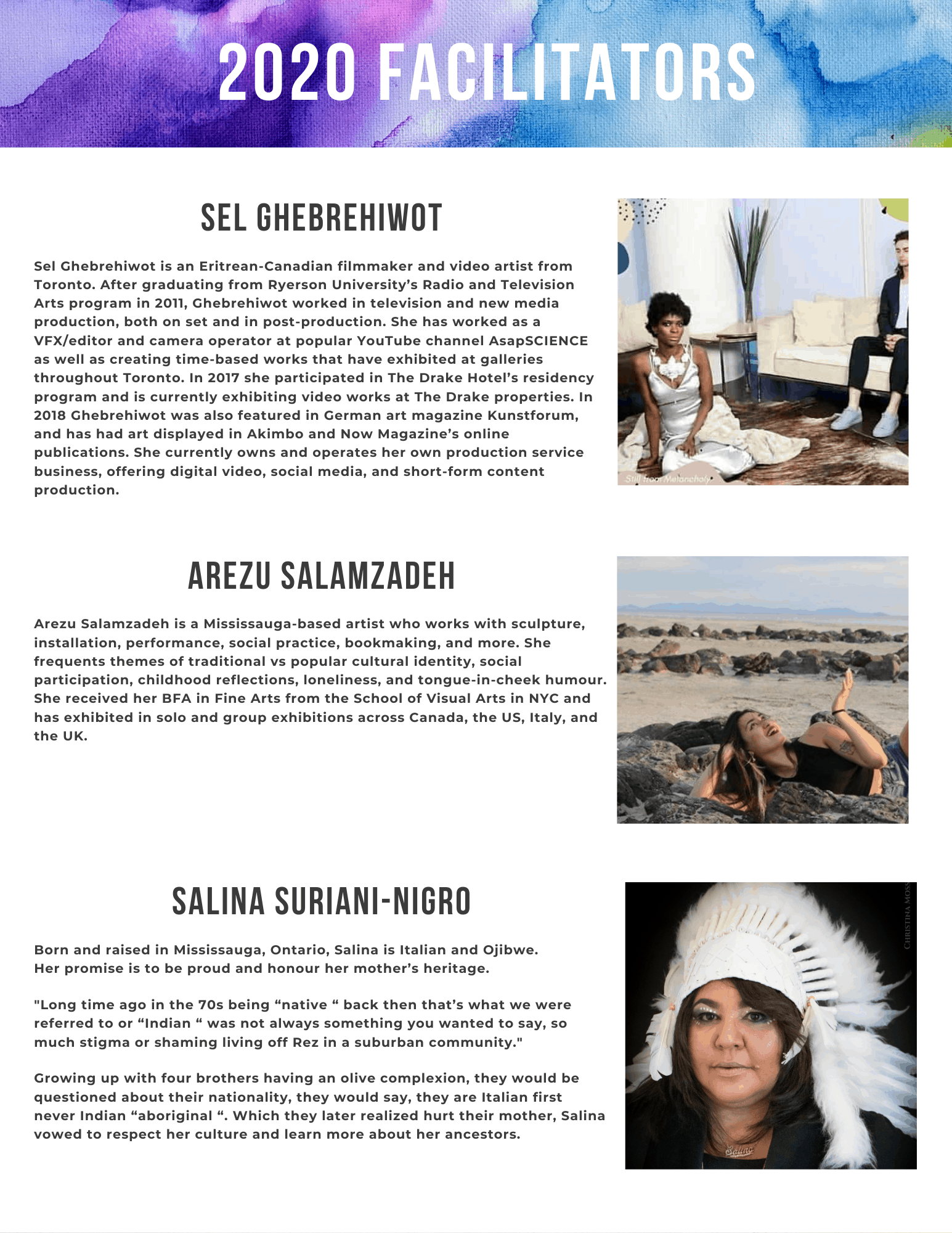 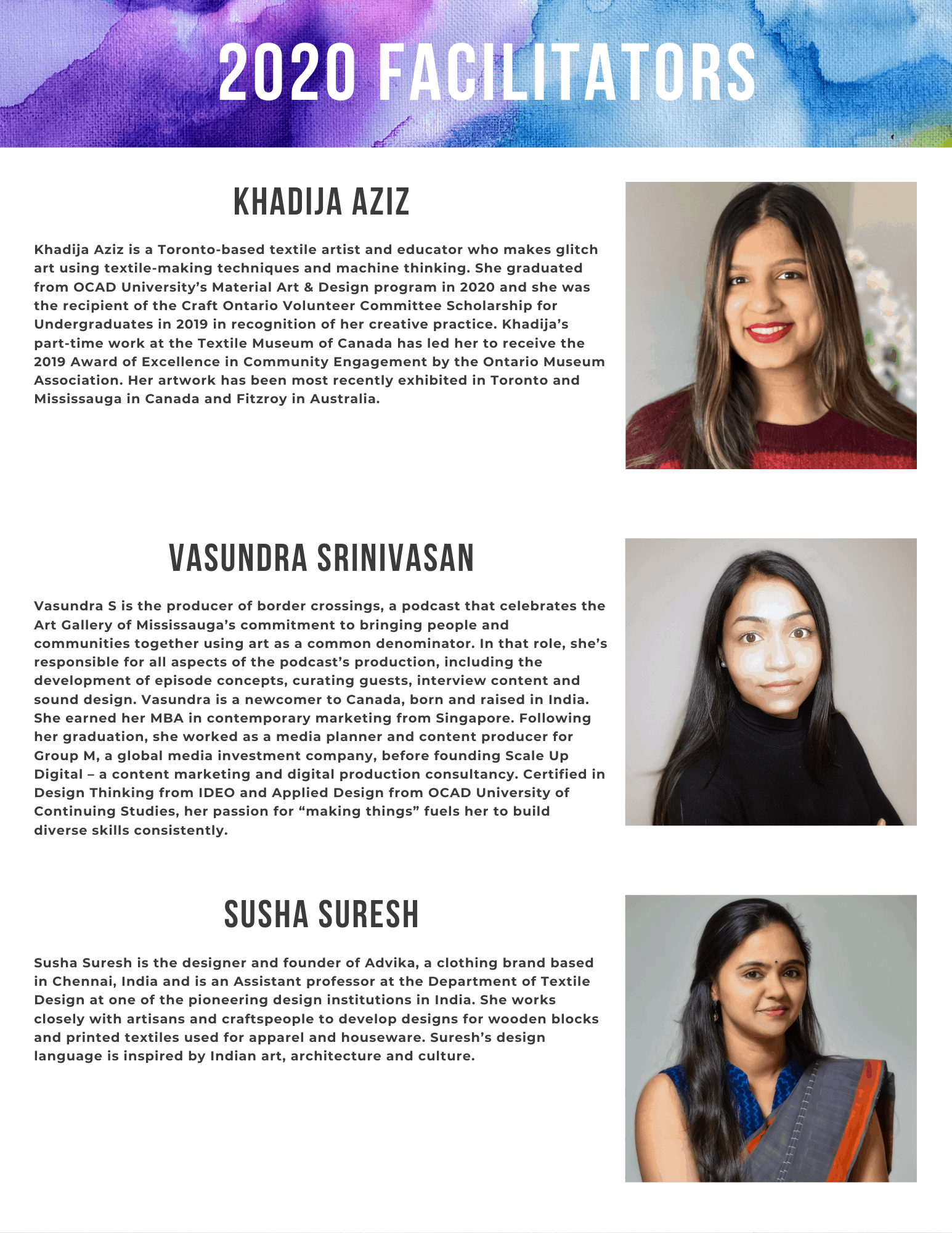 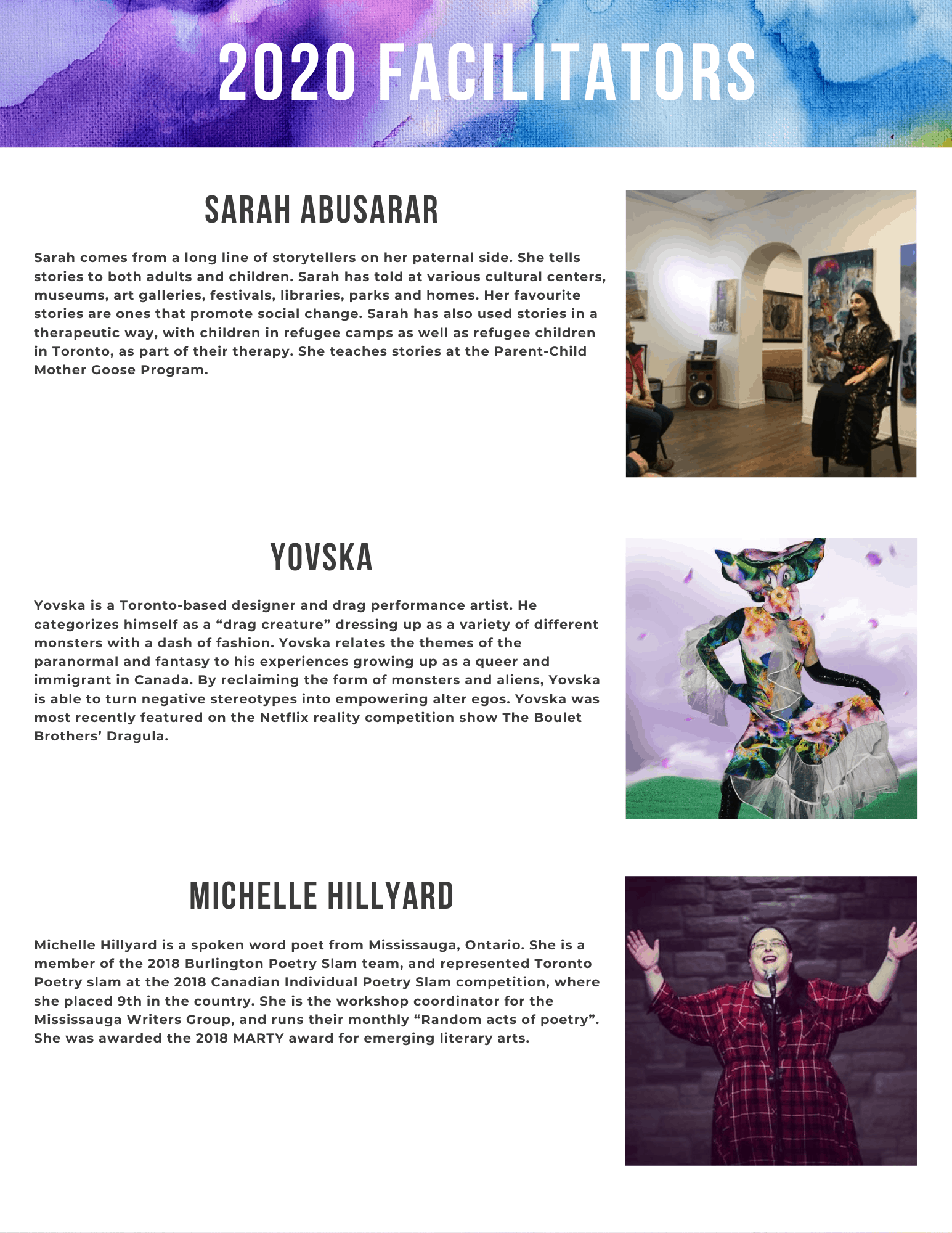 The border crossings project is generously funded by the Ontario Trillium Foundation (OTF) through the Grow Grant.

Vasundra S is the producer of border crossings, a podcast that celebrates the Art Gallery of Mississauga’s commitment to bringing people and communities together using art as a common denominator. In that role, she’s responsible for all aspects of the podcast’s production, including development of episode concepts, curating guests, interview content and sound design.

Vasundra is a newcomer to Canada, born and raised in India. She earned her MBA in contemporary marketing from Singapore. Following her graduation, she worked as a media planner and content producer for Group M, a global media investment company, before founding Scale Up Digital – a content marketing and digital production consultancy.

Certified in Design Thinking from IDEO and Applied Design from OCAD University of Continuing Studies, her passion for “making things” fuels her to build diverse skills consistently.

Vasundra is a multimedia artist who has trained and immersed herself in Creative Writing, Illustration, playing Indian Classical Music on the Violin, Yoga and Meditation over the past two decades. She considers her ability to be a many-model thinker and disciplined doer as what sets her apart as a creative producer. She finds herself most inspired at the intersection of technology and art. She is currently working on producing a graphic novel and a podcast as a lead artist for the Art Gallery of Mississauga’s border crossings project

Sarah comes from a long line of storytellers on her paternal side. She tells stories to both adults and children. Sarah has told at various cultural centers, museums, art galleries, festivals, libraries, parks and homes.  Her favorite stories are ones that promote social change. Sarah has also used stories in a therapeutic way, with  children in refugee camps as well as refugee children in Toronto, as part of their therapy. She teaches stories at the Parent Child Mother Goose Program.

Claudio Ghirardo is a graduate of the Joe Kubert School of Cartoon & Graphic Art, Inc., who worked as a freelance illustrator while going to school and then studied art. As time went on, he began to recognize that comics are an art-form and wanted to experiment with the medium. For Ghirardo, comics are visual literature and he got his inspiration from contemporary artist Cai Guo-Qiang who stated that the Chinese have a saying, “One reads a drawing.” This prompted him to explore how we read images in sequence in comics. Ghirardo contributed to “The 27 Club” anthology which got a Harvey Award Nomination for Best Anthology in 2016, contributed to a number of anthologies, is the artist for WrittenSins’ (an independent comic publisher) “And They Call Us Monsters” and “A Monster of a Betrayal”. He began doing his own webcomic in 2011, had his work shown at Fumetto Comics Festival in Luzern, Switzerland, and self-published a number of zines and comics.

Michelle Hillyard (she/her) is an award-winning poet, workshop facilitator and current board member for both the national spoken work group speakNORTH and the Mississauga Writers Group.

Maker and Teacher, Sandra Clarke, has been untangling yarn and exploring nature themes through illustration for over 30 years. Born in Montreal and educated throughout North America, helped Sandra develop her eclectic style. Sandra’s fibre arts and illustration workshops marry traditional and contemporary art while still retaining functionality. Sandra lives with her husband and children, dividing her time between Mississauga and her off-grid cabin near Algonquin Park.

Khadija Aziz is a Toronto-based textile artist and educator who makes glitch art using textile-making techniques and machine thinking. She graduated from OCAD University’s Material Art & Design program in 2020 and she was the recipient of the Craft Ontario Volunteer Committee Scholarship for Undergraduates in 2019 in recognition of her creative practice. Khadija’s part-time work at the Textile Museum of Canada has led her to receive the 2019 Award of Excellence in Community Engagement by the Ontario Museum Association. Her artwork has been most recently exhibited in Toronto and Mississauga in Canada and Fitzroy in Australia.

Sel Ghebrehiwot is an Eritrean-Canadian filmmaker and video artist from Toronto. After graduating from Ryerson University’s Radio and Television Arts program in 2011, Ghebrehiwot worked in television and new media production, both on set and in post production. She has worked as a VFX/editor and camera operator at popular YouTube channel AsapSCIENCE as well as creating time based works that have exhibited at galleries throughout Toronto. In 2017 she participated in The Drake Hotel’s residency program and is currently exhibiting video works at The Drake properties. In 2018 Ghebrehiwot was also featured in German art magazine Kunstforum, and has had art displayed in Akimbo and Now Magazine’s online publications. She currently owns and operates her own production service business, offering digital video, social media, and short form content production.

Arezu Salamzadeh is a Mississauga-based artist who works with sculpture, installation, performance, social practice, bookmaking, and more. She frequents themes of traditional vs popular cultural identity, social participation, childhood reflections, loneliness, and tongue- in-cheek humor. She received her BFA in Fine Arts from the School of Visual Arts in NYC, and has exhibited in solo and group exhibitions across Canada, the US, Italy, and the UK

Angela Chao is an experienced filmmaker, having worked in the Toronto film industry in the camera department for 17 years in IATSE 667. In addition, her artwork has been a constant companion in her health recovery process after her concussion in 2015. She has first hand experience on the positive impact that the arts have on wellbeing. She can personally speak to the power of arts as a healing and coping tool. She started to create abstract painting to help express her emotions. Painting and the arts help her communicate the depression, anxiety and sadness that she feels inside. Angela was awarded the Emerging Visual Artist of the year, at the 2017 Marty’s by the Mississauga Arts Council. In 2019 Angela was awarded with the Community Heritage award and the Modern Heritage award with Heritage Mississauga at the Credits.

Carla Gonzalez was born in Caracas -Venezuela but left her native land at the early age of 3 to travel the world with her parents, this gave her an opportunity to explore and learn a lot about cultures and colours which will come into play when she started picking up drawing and painting at an early age, her first drawing class took place in Hong Kong,  Design & Caribbean history in Trinidad and Tobago, back to Caracas for Art Fundamentals  and finally she earned her Fine Arts  Diploma from Toronto School of Arts in 1997, in the following years she worked as a Graphic Designer  in Colour Vision Inc. and after she went on to one of her favourite journeys teaching art to kids and adults alike. Her favourite subjects for art are women & mother nature, her mediums go from pencil crayon, ink, acrylics & oils. She believes life is a collective journey and is her intention to make it a colourful one for her and those who she is blessed to share it with.

Rafia Shafiq is a craft artist based in Oakville, Ontario. She launched a program called Dhaga Art (@dhaga.art) which focuses on reviving Phulkari craft – a traditional Punjabi embroidery technique of Pakistan and India. Through a series of interactive workshops at various textile studios, art galleries, colleges and museums in the Greater Toronto Area, she has found a great appreciation and interest for Phulkari embroidery in the local artist audience. Her work has been displayed at various art exhibitions and available for purchase at RAWspace Toronto.

As an alumni of RBC’s Top 25 Canadian Immigrants, Wali Shah is a poet and public speaker. He’s delivered TED talks, created poetry for corporate events, narrated voice overs for commercials, and spoken at hundreds of schools and colleges across North America. Wali has toured Canada coast to coast as a WE Day performer, and closed out President Barack Obama’s keynote speech with a bespoke poetic message in Toronto. Wali has also served his hometown, as Poet Laureate for the City of Mississauga.

Sid Sharp is a 25-year-old comic artist and emerging illustrator from Toronto. They collaborated in several community arts projects and installations across the GTA and Ontario. For the ‘border crossings’ Project, Sid facilitated community workshop and created an anchor/central character to feature stories shared by the communities in a graphic representation.

Sonja Rainey is a multi-disciplinary artist, designer and arts facilitator with a rampant curiosity for new ways of creating performance experiences and arts engagement. Her work encompasses installation, set and costume design; puppet and mask work; illustration and sculpture as well as the creation of short films and exhibition design. She has presented her work at the Vancouver Art Gallery, PAMA, Art Gallery of Mississauga, the Prague Quadrennial and most recently, Rainey has been an artist educator with the Canadian Opera Company and instructor at the Manitoulin Conservatory for Creation and Performance. She has worked extensively with MABELLEarts, Jumblies’ Theatre, Making Room Community Arts, the Community Arts Guild, The Bicycle Opera Project, urbanvessel and Ahuri Theatre.

Helen Yung is a multi-disciplinary artist from Toronto. Her current artistic work with newcomers to Canada has been recognized by a groundbreaking research partnership with Humber College. Her ongoing newcomers project combines art, community engagement and social innovation to suggest immediate ways to transform the settlement process for newcomers.

Anu Radha Verma is a queer, diasporic sometimes-femme with complex connections to ‘south asia,’ She is a survivor, someone with lived experience of mental health struggles, and a resident of Mississauga. Anu Radha organizes with QTBIPOC sauga, with the hope to build trust, care and community across the expanse of the ‘burbs.

Celebrated as a dance innovator, Nova Bhattacharya’s powerful and humanistic dance works breathe rich life into the spectrum between classical bharatanatyam and contemporary dance.  Bhattacharya trained in bharatanatyam with Toronto’s Menaka Thakkar, was the first graduate of Nrytyakala, The Canadian Academy of Indian Dance and furthered her study of the form with the late Kittappa Pillai and Smt. Kalanidhi Narayan.  Her development in contemporary dance has been informed by her ongoing work with Peggy Baker, Sasha Ivanochko and Louis Laberge-Côté.  She began her career as a dancer with the Menaka Thakkar Dance Company, appearing as a soloist and company member for many national and international tours.  Embarking on a career as an independent artist she appeared in the works of a number of companies including Fujiwara Dance Inventions, Kaeja d’Dance and Peggy Baker Dance Projects.  Eager to explore the scope for innovation within bharatanatyam, Bhattacharya began choreographing in 1997.  Her work has been described as “a contemporary expression of the Bharatanatyam form and more” (Vancouver Sun) and has been commissioned by DanceWorks, Blue Ceiling Dance/Lucy Rupert, Canada Dance Festival, Cahoots Theatre, Dusk Dances, Toronto Dance Theatre, Theatre Direct Canada and Dancemakers.  She has created four works in collaboration with Louis Laberge-Côté with whom she has been working since 2001, their most recent work Akshongay was nominated for four Dora Mavor Moore Awards.  In 2006 Bhattacharya was nominated for a Dora Mavor Moore Award in the Outstanding Performance category for José Navas’ Calm Abiding and in 2012 was awarded the Victor Martyn Lynch-Staunton Award for outstanding artistic achievement in dance. Nova created, choreographed and presented a dance & movement workshop that spoke to the themes of the ‘border crossings’ Project.